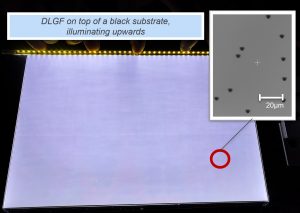 Society for Information Display’s (SID) annual symposium and tradeshow has come to a close with our virtual participation this year. However, rather than an end, it starts a new path to Nanocomp’s lightguide plate (LGP), that is our unique Directional Lightguide Film (DLGF).

Researchers from Microsoft Corp. have demonstrated their discoveries on far field imaging through liquid crystal displays (LCD) during the SID Display Week 2021 Symposium (link below). Nanocomp’s lightguide was adopted in their study and proved super effective in the application.

A standard LCD of the Microsoft Surface laptop has been used in their experiment, underneath which the backlight unit (BLU) was replaced with Nanocomp DLGF and a set of IR-transmission optimized light management films for the purpose of maximizing imaging clarity and securing the required luminance level for the display. The outcoupling prism microstructures in the DLGF function with the predefined position and orientation for an even illumination without optical artifacts such as granularity, moiré pattern or color sparkling. Even though 60 million of prisms exist in a notebook sized LGP/display, they appear sparsely distributed from a normal to plane projection. Consequently, the prisms populate only a fraction of the total surface area, resulting in nearly undisturbed see-through viewing properties on the component level.

In fact, when not lit by the edge LEDs, the lightguide plate could be considered as a transparent window. In the case of IR imaging applications, however, the simultaneous emission of the white edge LEDs does not affect the situation at all because of the wavelength difference in the optical system operation (VIS vs. NIR). In other words, Nanocomp’s LGP offers an unobstructed view for the underlying IR imaging system. While in a backlight mode, the luminance level could reach as high as 80% of the standard BLU level.

We are very excited to see the progress in far-field imaging for biometrics achieved by Microsoft’s researchers. This further assures us on the value and bright future of our DLGF, which features highly directional and uniform output and requires less optical films to construct the backlight unit underneath the LCD display. Practically, Nanocomp’s DLGF could work as a backlight unit on its own, without any supportive optical film stack, such as reflector, BEFs and diffusers. As a matter of fact, this approach has been successfully implemented in the automotive industry, where our component has been applied to an LCD display in order to create a switchable privacy function. Moreover, our DLGF has been applied in the high-resolution on-display fingerprint sensing application, based on the same functional merits.

If you are interested in receiving more information on Nanocomp´s unique DLGF, please contact our Business Development Manager, Marko Parikka marko.parikka@nanocomp.fi. We look forward to having cooperation with you.